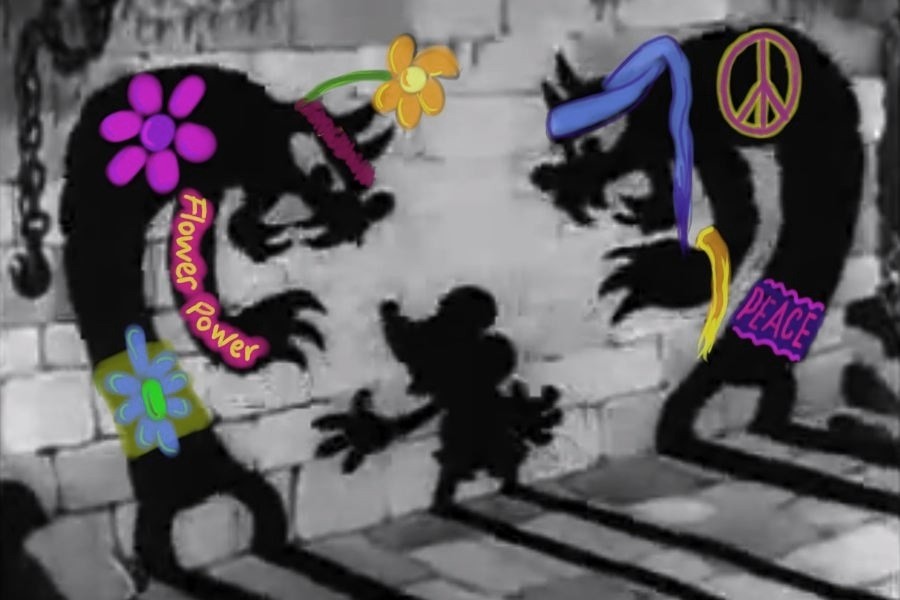 This image of Mickey and invading Yippies is from the 1933 cartoon “The Mad Doctor” which by some amazing circumstance is in the public domain.

We all have dreams we know we are supposed to pursue. Many times our pursuit seems thwarted.

When my mom, my brother, and I got into our ’67 Impala on Friday afternoon, we had no idea what had happened the day before.

Anti-establishmentarianism is a thing. And, somewhere in Orange County, California, during the summer of 1970, it was the thing that moved a political activist group toward destroying my summer. The Youth International Party, or Yippies, were disenchanted about many things. On one end of their disenchantment spectrum was the war in Vietnam, and on the other end, Disney dress code policies, so they planned a theatrical prank to take place at Disneyland on August 6, 1970. A flyer was created for this First International Yippie Pow Wow that included the following activities:

Ok, I do agree that these activities are near harmless. And, as you would guess, even though a limited amount of flyers were distributed by the group, officials at Disneyland got wind of the “invasion”. They connected with the Anaheim police department who had recently been training in crowd control. Hundreds of “riot police” were in place behind Main Street, USA on Thursday morning August 6. About 300 Yippies entered the park that morning. The regular guests confronted the disruptive behavior of the Yippies, and when there was a scuffle with a security guard, the riot police were released. It took awhile to round up the invaders, who missed most of their original scheduled events from the flyer, but they did end their day on Tom Sawyer island.

The next day, we were headed to my great aunt and uncle’s home in LA county for an overnight stay, followed by Saturday at Disneyland. Soon after we arrived, my uncle Shelby shared the small newspaper article with my mom. The headline read, “300 hippies invade Disneyland”. She finished reading the short article, immediately turned to us, and emphatically stated, “We are not going to Disneyland tomorrow!”

It was like my brother and I were now Yippies – in that moment, we became total anti-establishment. The establishment of MOM was oppressing us. Liberate the children! Free us from the tyranny!

You can imagine our horror. NOT going to Disneyland. The wailing began. Mom gave us the option of a nice day at Knott’s Berry Farm. Now look, I love Knott’s, but we had never been to Disneyland. We were geared up for Disneyland. It was like my brother and I were now Yippies – in that moment, we became total anti-establishment. The establishment of MOM was oppressing us. Liberate the children! Free us from the tyranny! Finally my mom exclaimed, “We’ll go, but if hippies are there, we are leaving for home – no Disney, no Knott’s, just home!” It was a gamble for my brother and I, but we agreed to the terms.

The only invasion at Disneyland on that Saturday was the two of us running through the park like a couple of puppies romping in a field. Living the dream. Seizing the day. Taking hold of our destiny.

We all have those dreams inside us that we know we are supposed to pursue. Many times our pursuit seems thwarted. You know, thwarted, like the potential thwarting of our day at Disney by the hippies. So, how do you have your “day at Disney” even while the hippies are invading?

The path is covered with obstacles, but obstacles are not stop signs from on high.
Seriously, if you move toward your goal, you will be slowed by something. It could be the rock in your shoe, or it could be an unforeseen chain of events. There is a phrase that you will hear from time to time. I’ve overheard it in conversations while checking out at the grocery store, “everything happens for a reason.” Realize that there can be a danger in the way you interpret that statement. If you believe that the reason you have been stopped on your way to your goal is to keep you from pursuing it, then you will likely not even take one more step. There is a healthy “everything happens for a reason” if you realize that the reason may be for your own growth as you continue on the journey.

Force is allowed.
It’s true. The bigger system set up by the Creator of the universe allows force. It’s those of us who actively press through the resistance that actually take hold of destiny. Press on!

You’ve got friends in high places.
Remember the thousands of years old truth that tells those of us who believe it, “And we know that God causes everything to work together for the good of those who love God and are called according to his purpose for them.”

You have the responsibility to pursue the journey entrusted to you. Know that there will be obstacles, know that you are expected to press through them, know that God is making good things happen on your way, and . . . peace, baby.

This image of Mickey and invading Yippies is from the 1933 cartoon, “The Mad Doctor” which, by some amazing circumstance, is in the public domain.